The full drawing and 3-D images can be viewed in the Clubhouse. 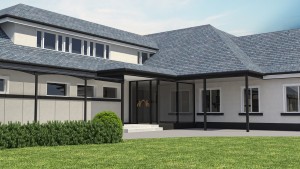 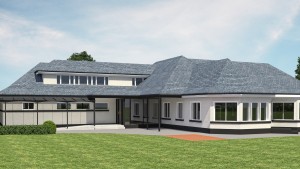 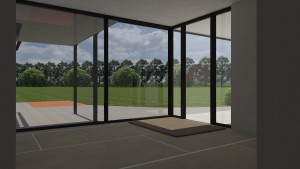 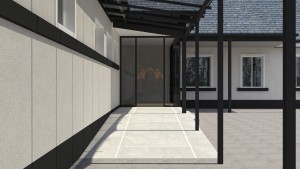 At the Autumn General Meeting it was apparent to the Committee that the motion did not meet the requirements of those present due to the lack of 3-D visual imaging and some design specifications.

However, the general feeling was that the proposal to improve the entrance to the Club was a good idea and worth pursuing further.

The Committee approached our architectural team to look at the issues raised and prepare fresh drawings.

Aeron initially looked at the possibility of gaining an entrance to the main clubhouse via the car park.

This immediately raised a few issues:-

As such, the Committee decided not to proceed with this option.

Aaron then looked at a design, which would not adversely affect the appearance of the main clubhouse, but recede into it, providing an aesthetically appealing physical effect. By removing the external wall between the entrance door and the men’s locker room (remaining previously from the earlier design) it has been possible to push the entrance hall half back into the building. The attached 3-D imaging shows this to its full effect.

The internal doors and walls will be redecorated to match the more attractive parts of the interior and create a more pleasing space. The introduction of an air curtain at the entrance door (warming on cold days and cooling on warm days) will be a welcome addition.

The new entrance to the men’s locker room will require the removal of a few of the existing metal and wooden lockers. However, it is intended to replace these elsewhere and members will not be adversely affected.

Although final estimates are still being received, approval will be sought at the Annual General Meeting for a ball-park figure of £60000 + VAT, with work to commence over next winter.

The Club entered the current financial year with £226,000 in the Bank and the Committee has unanimously agreed to present the motion for approval by the membership. This project remains the only capital project in the pipeline and is worthy of your support.

The full drawing and 3-D images can be viewed in the Clubhouse.